To share your memory on the wall of Kareem Garnett, sign in using one of the following options:

Provide comfort for the family of Kareem Garnett with a meaningful gesture of sympathy.

Kareem attended High School in Bridgewater and was preparing for his senior prom and graduation. Kareem was a happy and playful baby, and... Read More
Kareem Omar Garnett Jr. was born May 9, 2001 in Boston, MA to Deshaun Greene and Kareem Garnett Sr.

Kareem attended High School in Bridgewater and was preparing for his senior prom and graduation. Kareem was a happy and playful baby, and hardly ever cried. that carried on from toddlerhood all the way to his teenage years. Those who knew Reem, knew how full of life he was. Kareem was funny and you couldn't help but laugh with him, he stayed active doing everything from dancing to football. By the time he was 3 years old, he had already developed a love for dirt bikes like his father.

He was known for being one of the youngest riders, but also known as one of the best. He loved
riding his dirt bike, roller skating with his friends and family and spending quality time with his siblings.

Kareem was a loving son, brother and friend. He was preceded in death by his Brother Taquise Johnson and Uncle Anthony Greene.

Kareem leaves his loved ones to celebrate, cherish and preserve his life: his loving Parents Deshaun Greene and Kareem Garnett, (Shadena Agnew), his Grandparents - Connie Greene, Willma and Curtis Williams. Harry and Dora Granett, His Siblings - Nikia Johnson, Tarkia Greene, Kamari Garnett, Kaneatria Agnew, His nephews • Taquise Johnson Jr, Dominic Williams Jr, Kami Wilson. His Aunt - Quankia Conrad and his Uncles • Omar Greene, Jamal Williams. His Girl friend • Danayia Robinson. He also leaves behind a host of cousins and friends. He will be missed by many.

Ephesians 6:12 •"For we wrestle not against flesh and blood, but against principalities, against powers, against the rulers of the darkness of this world, against spiritual wickedness in high places."
Read Less

To send flowers to the family or plant a tree in memory of Kareem Omar Garnett Jr., please visit our Heartfelt Sympathies Store.

We encourage you to share your most beloved memories of Kareem here, so that the family and other loved ones can always see it. You can upload cherished photographs, or share your favorite stories, and can even comment on those shared by others.

Posted Mar 04, 2020 at 12:27pm
My condolences to you and your family may God continue to bless you give you strength stability in faith as you walk through this journey God bless you.
Comment Share
Share via:
DP 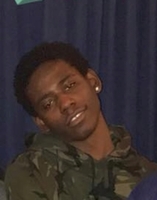