To share your memory on the wall of James Archibald, sign in using one of the following options:

Print
James Archibald Sr., the eldest child of Victor and Gertrude Archibald, was born on December 25, 1922, in Manhattan, New York.

During his childhood, James was educated in the borough of Manhattan educational system. In June of 1943 he en... Read More
James Archibald Sr., the eldest child of Victor and Gertrude Archibald, was born on December 25, 1922, in Manhattan, New York.

During his childhood, James was educated in the borough of Manhattan educational system. In June of 1943 he enlisted in the U.S. Army and served in World War II in the 1323rd engineer regiment. He recieved an American Service Metal and a Good conduct metal. After being honorably discharged from the service in 1946 he worked as a shipping clerk.

In 1978, James was baptized at St. Augusine’s Episcopal Church in New York City.

In 1993 , James relocated to Boston, MA. Soon after he joined St. Cyprians Episcopal church. He was an avid walker who carried his camera wherever he wallked. He loved taking pictures as well as being in them. James enjoyed wearing the latest fashions with his boots. He also was a lover of music, especially jazz. His favorite gospel song was “How Great Thou Art”. He enjoyed visits from his children and grandchilden while he resided at the Edgar P. Benjamin Healthcare Center.

We encourage you to share your most beloved memories of James here, so that the family and other loved ones can always see it. You can upload cherished photographs, or share your favorite stories, and can even comment on those shared by others.

Plant a Tree in Memory of James
Plant a tree 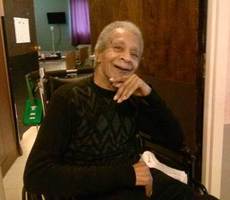