To share your memory on the wall of Sarah White, sign in using one of the following options:

She was ambitious, devoted to God, loved her family and people as a whole.

With her late husband James Letward Sylvester White, a minister of the Gospel himself, she remained faithful to God and her church while raising their seven children in the fear and admonition of the Lord. She held to her conviction; All thy children will be taught the fear of the Lord and great shall be their peace Is.54:13.
After the passing of her husband she took to entrepreneurship, fulfilling her passion as seamstress and owner of Sarah 's boutique until relocating to Boston, Massachusetts with her family in the late70s.

Upon arrival she secured employment working as a nurse's aide at New England Medical Center and occasionally working part-time at various nursing homes. She later returned to business ownership in 1986 when she opened Emmanuel Fashions in Dorchester, MA.

She was a faithful member of the Beulah Pilgrim Holiness Church and later, Deeper Life Full Gospel Ministries until relocating to Miami, Florida. There she attended New Testament Church of God in Perine, Florida and was ordained as a minister of the Gospel. Shortly after being ordained, she launched Faith in Action ministries, a telephone-based prayer ministry with occasional assemblies.

She retired in 1996 and returned to Boston to assist with the care of her aging mom.

Since returning she continued the Faith in Action Ministry at her new home church Greater Love Tabernacle Church where she started an annual prayer rally. She later joined Holy Tabernacle Church where she served as leader of the Prayer Warriors ministry, meeting various prayer needs, conducting mid-day prayer services and continuing with an annual prayer rally. She was well known for her favorite saying “I'm on the winning side”.

To send flowers to the family or plant a tree in memory of Sarah Jane White (Reid), please visit our Heartfelt Sympathies Store.
Print

We encourage you to share your most beloved memories of Sarah here, so that the family and other loved ones can always see it. You can upload cherished photographs, or share your favorite stories, and can even comment on those shared by others. 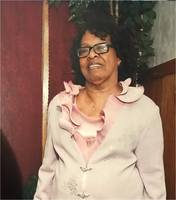 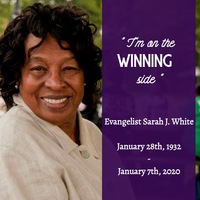