To share your memory on the wall of Joan Rudolfo, sign in using one of the following options:

Provide comfort for the family of Joan Rudolfo with a meaningful gesture of sympathy.

January 19th, 1974 at the age of twenty-five, Joan married Frank Rudolfo (deceased). February 1978 they were gifted with their only child Janine Rudolfo known to many as Franka. Not only was Joan always there for others she had a passion for helping others succeed. In 1980 she open her own advertising agency called F.J.R. Advertising. By 1984 Joan had published the first caribbean love magazine called Ours. Joan was known throughout Trinidad for her Beach Lime event and her support of the Joy Reid Operation Fundraiser to help pay for an operation to help her walk.

Joan has been a God fearing woman her entire life. November 1984 Joan stepped on faith and migrated to America with her only child and very few belongings. She continued to do her heart’s calling by becoming a Home Health Aide for almost 30yrs. In those thirty years she was able to work hard, save and build a foundation not only for her child and grandchildren but for many others.

Joan was always a visionary. She loved to create and think of things to make life simpler. Even up until her sickness she had patent a creation for a device that she hoped would one day help someone. Joan also loved to travel, have visited China to walk the Great Wall to the strip in Las Vegas. Joan is best described as vibrant with an infectious smile and laugh.On the night of November 30, 2019 surrounded by her loved ones, Joan Pamella Rudolfo peacefully entered eternal rest. She will be greatly missed and remembered as a loving daughter, sister, mother, grandmother, great-grandmother and great friend.

We encourage you to share your most beloved memories of Joan here, so that the family and other loved ones can always see it. You can upload cherished photographs, or share your favorite stories, and can even comment on those shared by others. 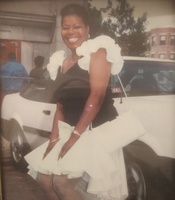