To share your memory on the wall of Jared Brown, sign in using one of the following options:

Provide comfort for the family of Jared Brown with a meaningful gesture of sympathy.

To send flowers to the family or plant a tree in memory of Jared S Brown, please visit our Heartfelt Sympathies Store.

We encourage you to share your most beloved memories of Jared here, so that the family and other loved ones can always see it. You can upload cherished photographs, or share your favorite stories, and can even comment on those shared by others.

Posted Sep 06, 2019 at 08:43pm
Dear Shirley,
How sad that you lost your dear son. My thoughts and sympathy are with you at this.
May God give you strength to see you through this tragedy.
Love Betty Minassian
Comment Share
Share via:
EM

Posted Sep 06, 2019 at 06:36pm
If flowers grow in Heaven, Lord, then pick a bunch for us. Then place them in our friend arms and tell him they're from us. Tell him that we love and miss him and when he turns to smile, place a kiss upon his cheek and hold him for awhile.
We miss you Jared
Tiffany
Tylia
Deshawn
Comment Share
Share via: 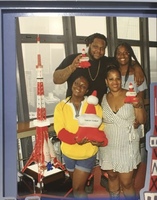