To share your memory on the wall of Judith Montgomery, sign in using one of the following options:

Print
To everything there is a season. A time for every purpose under heaven.” -Ecclesiastes 3:1

Sadly, on August 5, 2019, a beloved pillar of our community was called home to eternal rest with her Lord and Saviour after a long bout with ill... Read More
To everything there is a season. A time for every purpose under heaven.” -Ecclesiastes 3:1

Sadly, on August 5, 2019, a beloved pillar of our community was called home to eternal rest with her Lord and Saviour after a long bout with illness.

Judith Ann Montgomery was born on November 7, 1949 in Lynn, Massachusetts. She was the 2nd of 3 girls born to Henry R. Robinson and Geneva B. Robinson.

Judith Montgomery was a lady who wore many hats. Not only did she raise 3 beautiful daughters and share a loving relationship with her partner of 30 years, she also managed to make time to retire from a small company named G.E., served as a member of her Eastern Star local chapter, traveled the globe with family and friends, held many officer positions with various organizations, attended church service regularly and was proudly known as “Nana” to her grandchildren and “Gigi” to her great grandchildren whom she loved on as she watched them grow. Needless to say Judi as many of us knew her did her “thang”.

As a young woman Judi knew she was destined to be successful. She went to work for the local telephone company as she embarked on her journey to be independent. She would soon find her next venture when she took a position with General Electric back in 1972. Judy was a tireless worker until she retired after 32 years of faithful service.

Judith Ann Montgomery accepted Christ at an early age at Saint John’s Episcopal Church in Saugus, MA. She later in life was invited to attended service at Zion Church Ministries by her cousin Joseph Johnson and fell in love with the church family and continued to serve as a faithful member for more than 10 years.

Judi was also involved in various organizations as she was committed to serving the communities around the Boston area with her guidance and tireless efforts to help others both young and old. In August 1991 she became a member of Syria Court No.10 Daughters where she was honored as an Honorary Past Commandress. She also served as Past Worthy Matron of Rising Sun Chapter No.2. Judi not only held it down with the above mentioned positions, but found time to also serve as the Past President of the American Legion Auxiliary Post #45. As a true symbol of how dedicated she was to serving her community, this magnificent woman Judi Montgomery and her life partner Ronald L. Holliman attended the Imperial Council, A.E.A.O.N.M.S. Shriners and Daughters convention annually for 25 years straight. Whether or not you encountered her in the community in passing or saw pictures of her on a cruise or tropical island she always carried herself with dignity and grace.

She was preceded in death by her parents Henry and Geneva Robinson and her first grandchild, TeAsia S. Montgomery.

We encourage you to share your most beloved memories of Judith here, so that the family and other loved ones can always see it. You can upload cherished photographs, or share your favorite stories, and can even comment on those shared by others.

Posted Aug 14, 2019 at 09:08am
Judith was a sweet spirited woman that I will miss saying good morning to at Church. May she be at peace and have unspeakable joy- as she beholds the glory of the Lord while she is with him. - Erica Jarvis (Zion Church Ministries)
Comment Share
Share via:
LF

Posted Aug 12, 2019 at 06:05pm
Will miss you very much auntie, grateful for all the wonderful experiences you included me in!!! Thank you for being a great aunt & godmother!!!

Posted Aug 12, 2019 at 02:57pm
To the family of Judith Montgomery, Our prayers and love are with you. From, Ronald, Linda, Byron, Jermaine and (Tiffany), Terrance and Grandkids.

Ronald Jacobs purchased flowers for the family of Judith Montgomery.

from all your friends at pulmonary rehab

from all your friends at pulmonary rehab purchased flowers for the family of Judith Montgomery.

Charles McComas purchased flowers for the family of Judith Montgomery. 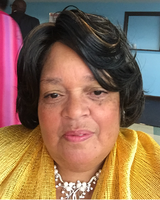