To share your memory on the wall of Essie Huggins, sign in using one of the following options:

Provide comfort for the family of Essie Huggins with a meaningful gesture of sympathy.

Print
Essie Huggins was born April 18,1923, in Manning, South Carolina to Mary Huggins and James Morris. She was the third sibling out of nine.

Essie was schooled mostly at home. She worked on the farms in South Carolina and planted vegetables... Read More
Essie Huggins was born April 18,1923, in Manning, South Carolina to Mary Huggins and James Morris. She was the third sibling out of nine.

Essie was schooled mostly at home. She worked on the farms in South Carolina and planted vegetables to harvest and sell. Later on she became a babysitter and helped raise her nieces and nephews. Essie had two sons; Lee Junior Huggins and Westley Lee Huggins, her boys were the love of her life.

As the years passed her second home became Deerfield Beach, Florida. She was an active member as well as Usher at the First Zion Missionary Baptist Church. Essie loved going to church and listening to gospel music as well as helping other members of the church and the pastor. Essie also enjoyed being outdoors, she would walk mornings and evenings everyday, she would always say “ I have to go for my walks”. She was outside so often her friends would always come by and look for her because she would always be outside enjoying the warm weather. Essie also enjoyed going fishing and cooking, and chewing her favorite tobacco “DaysWork.”

Essie moved to Boston in 2010 after losing her sister Bessie Mae Majors to live with her younger sister Alice Williams. It took her quite some time to get used to the cold weather. She would always wear her gloves, even when she was in the house. After some time Essie was able to join the Pace program(Adult Daycare) where she would spend most of the day. Essie couldn't wait to get up in the morning to get dressed and wear her many colorful hats to walk to the van. She always wanted to sit in the front seat of the van. She enjoyed the many activities she was able to do there such as coloring, getting her nails painted, playing games, and singing and clapping along to music. However as time passed, Essie's health began to deteriorate. She was no longer able to take care of herself, even with the help and support of her sister Alice. As Essie's health worsened she was put in a rehab where she did well before her unexpected passing. Although Essie was quiet in words, she was very feisty in spirit. Essie will be greatly missed by all of her family and friends, especially her only living sister Alice.

We encourage you to share your most beloved memories of Essie here, so that the family and other loved ones can always see it. You can upload cherished photographs, or share your favorite stories, and can even comment on those shared by others. 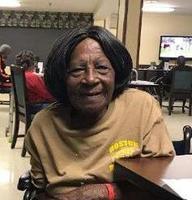