To share your memory on the wall of Gregory Sandefer, sign in using one of the following options:

After graduating from Boston Trade High School in 1973 he worked hard to find a career that would let him pursue his passion in life; taking road trips back to Macon, Georgia with stops in New York and Virginia as often as possible.

He worked at the Boston Globe for over 30 years with plans to move back to Macon after he retired.Being the amazing supportive man that he was, he put those plans on hold to be the primary caretaker of his youngest child and his mother when they had unexpected health problems. He spent the last seven years of his life with his partner Louise Quarles sharing with her their love of sports and family from Boston to Georgia.

Known as Big G,Unk, G Money and many other nicknames, he spent his weekends trash talking about teams and taking side bets with his friends and family on who ever was playing.His love of sports which he inherited from his mother was only surpassed by his love of knowledge and learning.His role as the patriarch of our beautiful lineage will live on through generations. His support, advice and generosity and love will live in our hearts forever.

To send flowers to the family or plant a tree in memory of Gregory L Sandefer, please visit our Heartfelt Sympathies Store.
Print

We encourage you to share your most beloved memories of Gregory here, so that the family and other loved ones can always see it. You can upload cherished photographs, or share your favorite stories, and can even comment on those shared by others. 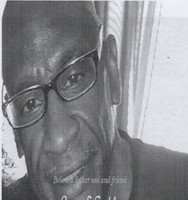