To share your memory on the wall of David King, sign in using one of the following options:

He received his education in the Boston public schools. Graduating from English High School in 1972.

He received his education in the Boston public schools. Graduating from English High School in 1972.

David started working at age 15 and held many different jobs until he had a stroke in November 2018. He worked various jobs as a teenager. When he graduated high school, he worked at Logan Airport. From there he went to work for the MBTA and also had an ice cream truck in the summer for about 4 years. He worked as a construction worker until he got injured on the job. David’s last job was one he seemed to enjoy the most. He was a Theatrical Stagehand in the I.A.T.S.E. Local # 11.

In David’s late teens and early twenties, he was a big brother to the neighborhood. He coached a summer basketball team for Boston Neighborhood Basketball League (BNBL). He also, hosted block parties in the schoolyard.

David’s children were the joy of his life. He was a devoted father. He championed his children. David worked hard because he wanted the best for his children. Education was very important to him and his children knew that. His daughter says he was a great father, great provider and her best friend. His son says he was superman, someone to look up to, smart, strong, funny and very brave.

He was a member of Morgan Memorial Church of all Nations. As an adult he did not go to church often, but he knew God.

The life and memory of David shall long be remembered by his children Danielle and David Jr., his mother Martha, his father Lloyd, his brother Derrek Sr., and his sister Donna, along with a host of Uncles, Aunts, Cousins, Nephews, a Niece and devoted friends.
David has left us to join his brothers Douglass and Darryl Sr. They are now watching March Madness together and arguing over plays.

To send flowers to the family or plant a tree in memory of David Eugene King Sr., please visit our Heartfelt Sympathies Store.
Print

We encourage you to share your most beloved memories of David here, so that the family and other loved ones can always see it. You can upload cherished photographs, or share your favorite stories, and can even comment on those shared by others.

Posted Apr 17, 2019 at 10:48am
To the family and friends of David King Sr.,
I am very sorry for your loss.
May you find comfort in the Bible’s hope that one day we will see our lost loved ones again. Jesus showed how this promise is sure when he resurrected Lazarus. John 11:1-44.
Such bible truths provide us with hope and comfort as we look forward to the day when death will no longer be and those who have already succumbed to this enemy will be awakened to a life free of pain, sorrow and the worries of ever dying again.
Even though this wonderful Promise from the One who can and will fulfill it doesn’t take away our pain and grief,
my wish is that this wonderful hope will bring you all a measure of comfort.
Revelation 21:3, 4; Isaiah 55:10, 11; Isaiah 25:8; John 6:40 and 1Corinthians 15:25, 26 🙏🏿
Like me you can learn more about these wonderful bible promises at jw.org.

Posted Apr 13, 2019 at 07:02am
Dear Family, I am so sorry to hear of the loss of your dear loved one and send you my sincere condolences. May you find comfort from God's word at Revelation 21:3,4 and John 5:28,29. Heartfelt prayers are with you during this difficult time.
Comment Share
Share via:
Y

Posted Apr 06, 2019 at 06:43pm
To Debbie and the King family, we are sorry for your loss. May God comfort and strengthen you all during this time of bereavement. Our deepest sympathies.
Walter Gousby and family
Comment Share
Share via:
LG

Posted Apr 06, 2019 at 04:54pm
David was a hard working man and took care of his family. Our thoughts and prayer are with the family. Debbie,Danielle and DJ we love you.
Linda and Shirley Gousby
Zola Williams
Comment Share
Share via:
CG

Posted Apr 06, 2019 at 12:22pm
To The King Family, Our heart felt condolence. Our family will not be the same without David. I hope we all can find comfort together during this difficult time, no words will ever do justice to the impact David has left on all who knew him,
From The Green family; Gousby; Lias; Williams; Wilson; Stephen; and the Community where he lived, we all love ya and share in your pain. David will be forever missed. 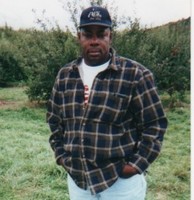